In the ongoing investigation by the Narcotics Control Bureau relating to an alleged drug case after Sushant Singh Rajput’s demise, several celebrities have come under the scanner. Currently, Bollywood actor Arjun Rampal and his girlfriend Gabriella Demetraides are in the NCB spotlight.

Earlier this week, both Arjun and Gabriella were summoned by the agency to be questioned for their involvement in consumption or procurement of contraband substances. This happened after Gabriella’s brother Agisilaos was taken into custody for alleged drug peddling. On November 9, Arjun’s residence was raided by the NCB and soon the couple was summoned for interrogation.

Gabriella arrived for her second round of questioning and was accompanied by her lawyer and Arjun. Arjun has now been summoned for interrogation on November 13. As per news agency ANI, the actor will be quizzed by the NCB this Friday. The tweet on ANI’s official handle, read as, “Mumbai: Actor Arjun Rampal summoned by Narcotics Control Bureau on 13th November…NCB conducted a raid at his premises on November 9. (file pic)” 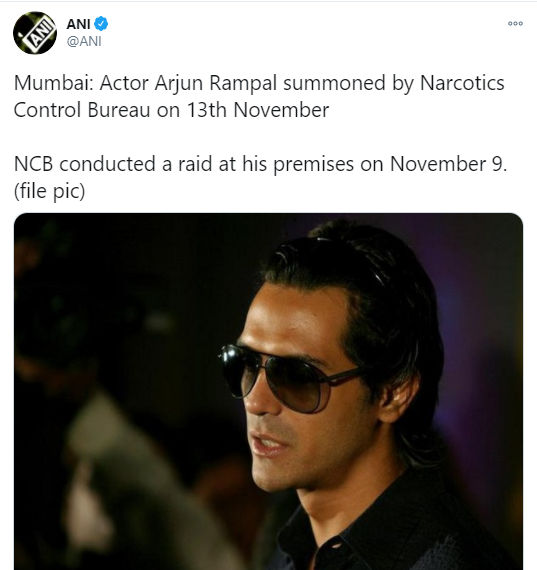 Several photos of Gabriella had surfaced on the internet as she was spotted outside the NCB office earlier today. The South African model had earlier been questioned by the agency on November 11.

Arjun and Gabriella have been together for a while now and have a son, Arik. Their relationship took over headlines when Arjun announced that the couple was expecting their first child together.